How (and why) do the ‘inner circle’ get to set the tone/form of the discourse? 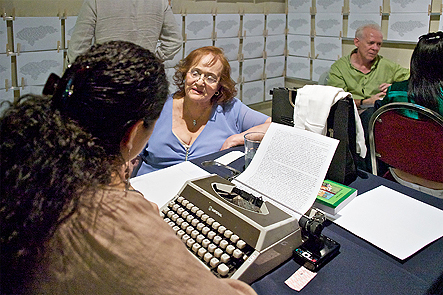 For me, this question refracts into a set of larger questions about the role of power in social practice, and how the discourse around social practice deals with power.

It communicates key assumptions about power that artists working with people to enact some sort of social change are decidedly not making in practice! The phrase “inner circle” declares that there is an inside and an outside that are fixed and beyond our control. It’s also a euphemism that talks about power without actually having to use the word. And the question indicates the limits of the questioner’s desire to influence by restricting itself to the tone and form of the discourse rather than directly asking meatier questions:

Who gets to talk?
What do they get to say?

The question finds power distasteful, handles it carefully, and positions the questioner as someone who doesn’t use it. Actual social practice, on the other hand, embraces power. Social interdependencies are formed by constant exchanges of influence, or power. The aesthetic experience of a socially engaged art project is often simply how these interdependencies have been re-arranged, utilized, discovered, elevated. When social practice artists are working at more ambitious scale, they are often actively moving beyond institutional critique into creating, infiltrating, collaborating with and otherwise “opting in*” to institutional and civic authority. We recognize this drive to influence and manipulate existing power relationships when we say that the aesthetics and ethics of this work are deeply intertwined.

What are we to make of this gap between what socially engaged art does with power and how we talk about it? What does a discourse that actively mucks about in the questions power creates look and sound like? Does it create opportunities for more power to be distributed to more people?

I think there’s little to lose and much to gain if we learn how to talk about power differently. A rich analysis of the aesthetic qualities of this work is beyond our reach until we can acknowledge power. And I don’t think we can recognize that the way artists are evolving beyond institutional critique and into creating institutions has real potential as an artistic movement unless we stop problematizing power in our discourse. Most importantly, talking openly about power could help us define and shape more positive and just applications of power. What if this discourse were built around an expectation that we claim the power we have and declare what we intend to do with it openly? What if our discourse around power was about accountability?

I think the best way to illustrate this is to return to the question. If I honestly answer how and why I got here, then I am accountable to this audience, not just for the tone and form of this discourse, but for the fact that I get to talk at all, and what I’m saying.

Since 2012, A Blade of Grass has been funding socially engaged art, so I am new to this discourse, but am part of the “inner circle” because I manage resources and help determine who gets a platform. Before ABOG, I was an artist in the “outer circles,” so I’m disposed to think of this boundary as permeable. And I know it doesn’t always work this way, but I only gained the ability to influence others when I decided that the most interesting thing I could do as an artist is help other artists.

*Hat Tip to Frances Whitehead’s “What Do Artists Know?”

About the contributor: Deborah Fisher is the founding Executive Director of A Blade of Grass. An artist, administrator and entrepreneur, Fisher has worked as an arts and philanthropic advisor to Shelley and Donald Rubin, studio manager of Socrates Sculpture Park, as an educator and curriculum developer for the Brooklyn Center for the Urban Environment, and has taught studio and art appreciation classes at New York University, St. John’s University, and Nassau Community College. Fisher’s art practice seeks to understand the things we build as interconnected ecosystems, and focuses on public projects. abladeofgrass.org