Where do I place value in my work? 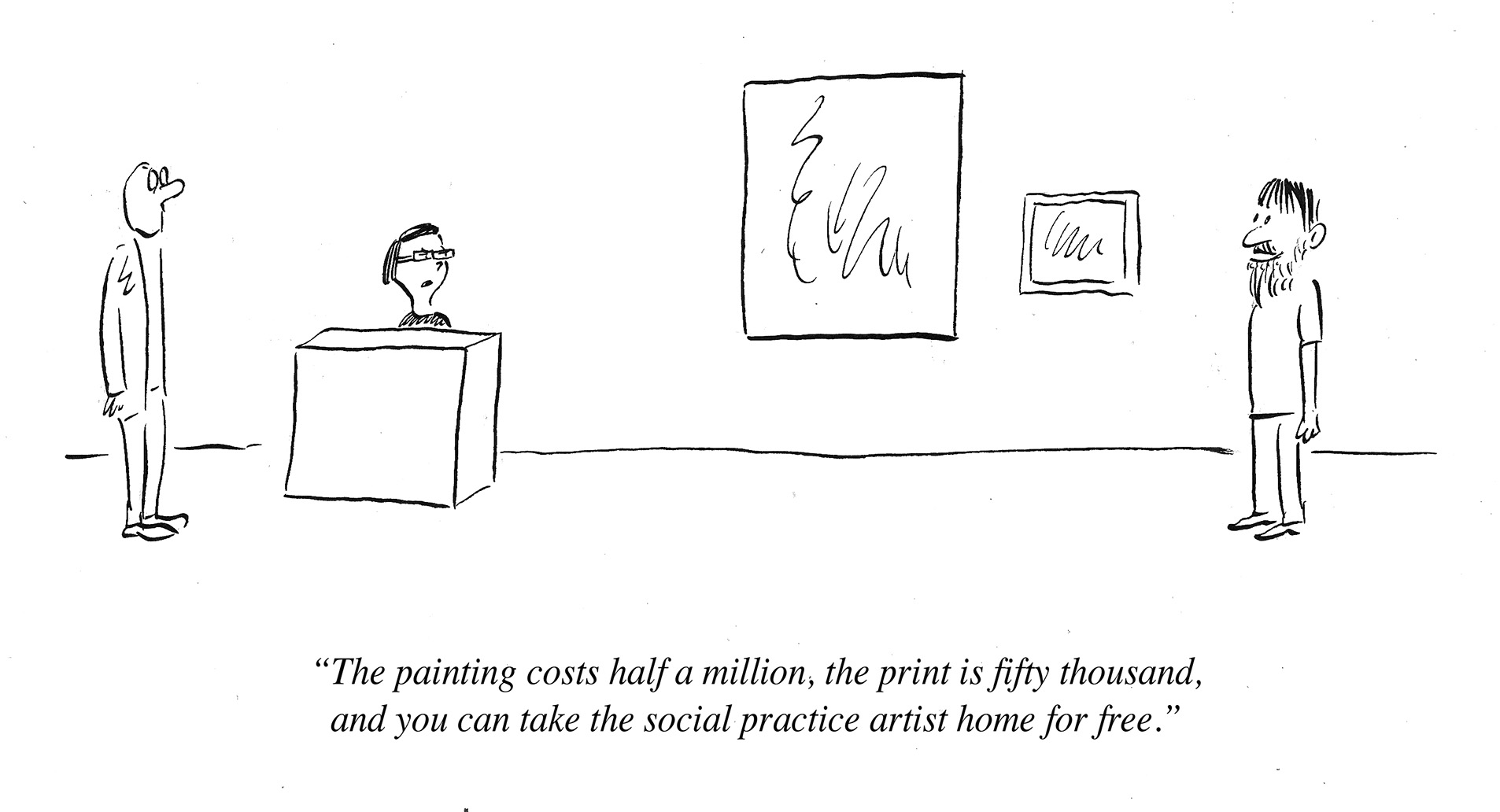 When we speak about socially engaged art (SEA), the problem with value can be summarized in two questions: If I make an aesthetically compelling work that is ineffective as a social experience, is it still valuable? And alternatively, if I create a social experience that is only called art in a nominal way, why should it have any currency in the art system?

In a book entitled Art Scenes, I tried to make a distinction between extrinsic and intrinsic value in art. Intrinsic value is something that we usually equate with aesthetic value––something like the “soul” of the artwork. It is invisible, and we can’t really explain it, but we acknowledge it is there. For instance, there is a certain consensus that Guernica is a good painting, but we all have different opinions and interpretations as to why. It is more like trying to explain what the piece “feels” like. Extrinsic value, in contrast, is what the art work does––something that can be quantified and recorded. As in: it costs one million dollars, it was seen by x amount of people, it caused someone to steal it, etc. In paintings, extrinsic value is an indicator of their artistic relevance, but it is not definitive. For example, the fact alone that a given artist would have sold dozens of art works would not make him or her necessarily a good artist.

In contrast, the extrinsic effects of a SEA work are very much connected to its value. As in: did I or did I not work with a group of people to accomplish x? Did the x task have a verifiable impact in them, or didn’t it?

So while most art works can and perhaps should be discussed in the more delineated symbolic realm of the art discourse, SEA works have to be discussed both in that regard as well as in how they fare outside of that symbolic realm. This means that the two questions that I started with are usually interrelated. A SEA work that is ineffective as an intervention in the social realm may still be a wonderful symbolic action (let’s say wonderful as a poetic idea) or something that fails to broaden a discussion beyond every day terms may still work as a straightforward social action (if I paint someone’s house as an art project, it may not be really that interesting to discuss as art, but I did do a good deed).

Where do we place value then? I don’t see how we can escape this double register in which the work needs to function, but in the end I don’t believe it is so complicated to negotiate those two registers. The more complicated problem, however, may have to do with ourselves, as we try to balance our hypothesis of what may happen on paper with the eventualities of what transpires on the ground, as we improvise and as we change course when things don’t seem to go in the right direction. Let’s say that there is the external valuation (what the public, the critics, etc. may say of what we have done) and the internal valuation, which has to do more with how we assess ourselves in the process. Did we personally accomplish what we were looking for? Were our hypotheses of what could happen confirmed? Did we negotiate the obstacles properly, creatively? This, I find, is the most difficult, but perhaps most important part of evaluating a project, as we all tend to fall short at self-criticism and are too prone to conceal any perceived shortcomings to the public, so we instinctively conceal it to ourselves as well. It is perhaps the balance of the public and personal examination that ultimately can tell us if what we have done something worth doing, and can teach us so that we can employ what we learned in our next project.

About the contributor: Pablo Helguera has used installation, photography, drawing, writing, musical performance and large-scale projects as elements of his work. His work as an educator has usually intersected his interest as an artist, making his work often reflects on issues of interpretation, dialogue, and the role of contemporary culture in a global reality. This intersection is best exemplified in his project, “The School of Panamerican Unrest”, a nomadic think-tank that physically crossed the continent by car from Anchorage, Alaska to Tierra del Fuego, making 40 stops in between. His musical performances, which have taken place from Mexico City to the Museum of Modern Art in New York, combine elements of classical music and opera, as well as more conceptual explorations of musical structure and score. “Parallel Lives,” for example, which was performed at the MoMA in 2003, placed performance practices within the exhibition context. He has authored several books, including Education for Socially Engaged Art, published in 2011 and Art Scenes: The Social Scripts of the Art World, 2012. In addition to his art, music and writing practice, Helguera formerly served as the Head of Public Programs in the Education department of the Guggenheim Museum, and is currently the Director of Adult Academic programs at MoMA. pablohelguera.net