Nine Urban Biotopes, or, a view of Johannesburg from Berlin.

During 2013 and 2014 I worked, initially as South African creative-coordinator, and then as one of the selected artists, on the project Nine Urban Biotopes – Negotiating the Future of Urban Living (9UB), which was a South African-European socially engaged art project that produced research, dialogue, exchange, and in some cases, objects, in relation to the perceived challenges of contemporary urban living.

The project was conceived and directed by Stefan Horn, of the Berlin based organization, urban dialogues. He developed a complex, networked project that comprised 11 partners, (several more associates), and nine artistic projects in five countries on two continents!

Between January and October 2014, 4 European artists––Armin Linke, Antje Schiffers, Marjetica Potrč and Anthony Schrag––worked in South Africa, while 5 South Africans––Athi-Patra Ruga, Dan Halter, Taswald Pillay, Rangoato Hlasane, and myself, Terry Kurgan––worked in Europe. Three projects ran simultaneously; each for a period of three consecutive months and the idea was to see how each artist, working in their own particular way, and in their own particular formal language, might imaginatively approach and respond to each partner organization’s work and concerns.

Each artist and residency projects’ research, process and final presentation were documented as they went along, and could be followed and tracked in a range of media on the 9UB project’s website timeline. 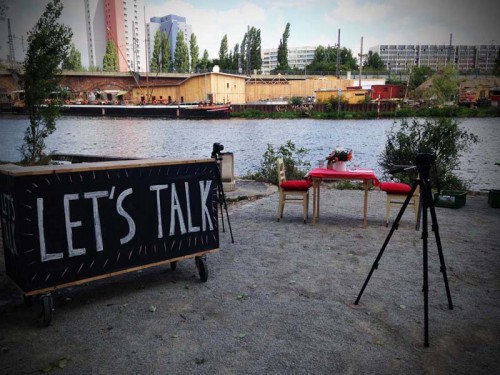 Between July and September 2014, I went to live and work in Berlin. I was paired with the organisation id22 – The Institute for Creative Sustainability, who focused on, amongst other things, the development of alternative cooperative housing cultures. They work against the tide of gentrification and privatization, in an attempt to prevent the city of Berlin from being sold to the highest bidder. I had to try and find my own project within theirs.

So. For my first few weeks, and in search of an idea, I interviewed a range of urban practitioners, artists, activists and others, to try and understand where I was, and what it was that mattered most to people who were living in Berlin. And then I decided to focus my project on an area measuring one square kilometer, (including the offices of my host), located along the Spree River between Kreuzberg and Mitte, right on the former border between East and West, because it was my sense that this particular neighborhood, represented a microcosm of the topics that I had just come to understand, generated some ‘heat’ and ‘light’ at the front of things in Berlin.

Rising pressure on the Berlin housing market had directed keen attention towards this part of the city, resulting in heated conflict between public and private interests, and with regard to ideas about possible development paths to follow. And, the area I chose to work in, contained three distinct and contrasting housing developments: firstly––the three brand new, barrier-free, eight-storey communally owned and managed, eco-friendly buildings of the Spreefeld Housing Cooperative, secondly––an informal settlement of self made plastic shelters called Teepee Land, an idealistic experiment in communal living evoking the spirit of Berlin’s early 1990s; and finally, the Seifen Fabrik, an upmarket residential development, and transformation of a former soap factory into luxury apartments for private investment. Linking these three barrier-free quite different universes were the extensive public, semi-public and private spaces running all the way along the Spree River front, and upon which all of them rest.

(I have to add that at the same time, and in keeping with the preoccupations that run through my larger body of work … I was keeping my eye open for ‘ghosts’. Berlin, it was my sense, more than most other cities I have ever visited, memorializes its complex and difficult past at every turn).

Together with Stefan Schwarz and Ingrid Sabbatier of ISSSresearch&architecture, and their summer school students, we designed and built a mobile ‘laboratory’. For 30 days I wheeled my “Let’s Talk” trolley––a mobile “SpreeLab” ––around the neighbourhood surrounding the three newly erected, buildings of the Spreefeld Co-operative housing project, situated, as it is, upon the scars of the old division between East and West, in the heart of this controversially, but nonetheless rapidly, gentrifying neighborhood on the banks of the River Spree.

Most days I set up my kitchen table for four to five hours at a time, in the middle of the many public paths that run through and towards the Cooperative, close to the river.  I asked strangers to talk to me. I offered them tea. And then I asked them to satisfy my curiosity about their origins, their occupation, and what they were doing on this particular spot at that moment. 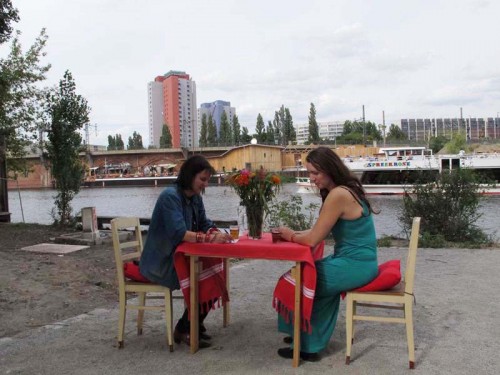 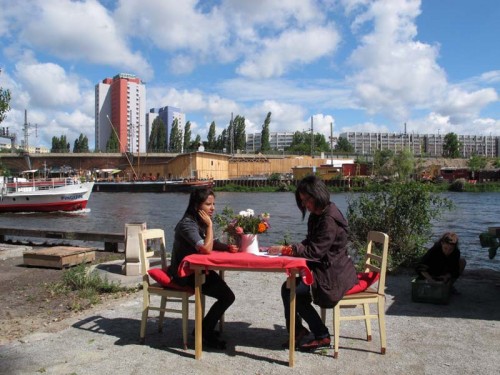 During my process, conversations took their own turn depending upon whom I was talking to and which threads I decided to follow. I was offered recipes and advice: how to make good duck soup, build a tree house, and be successful in love. How to buy real estate along the Spree, or join a “Right to the City”organisation that opposed it. Somebody sang me a Marlene Dietrich song, and somebody else told me where in the city I could buy stylish shoes for my ‘too big’ feet. But almost everybody at some point returned to what appears to be the Berlin issue, that of real estate speculation, greed and gentrification; the pressure coming to bear from both the city and private developers, and the threat that this poses to the fragile eco-system of the surrounding neighbourhood, and the diversity that has long characterised the social fabric of this City. 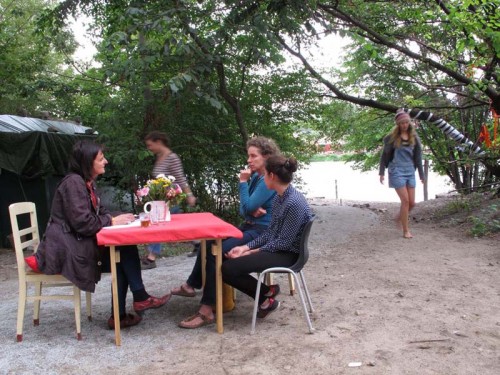 The smartphone photograph taken at the end of each conversation seals the exchange, and exists less as an object and more as a gesture: the remnant and proof of participation in a process, and acknowledgement perhaps, of human connection. My presentation of this process represented a selection of these many conversations, (and it’s noteworthy to mention that in this time, I didn’t meet one single person who was originally from Berlin). The exhibition comprised a short stop-animation movie, capturing my process and the density and diversity of human traffic in this spot,  and a series of portrait photographs and their linked narrative texts that was installed into a perfectly intact former GDR river police boathouse (and after the fall of the wall, a famous club) right in the middle of the square kilometer within which I’d been roaming. 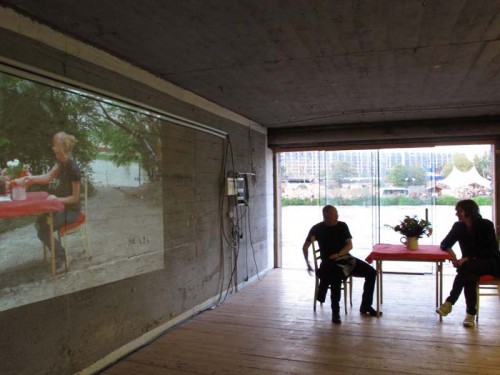 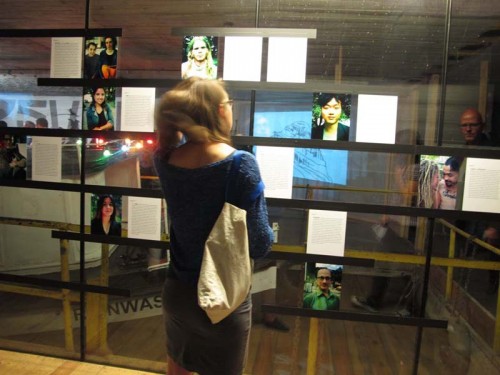 Wheeling myself about, the close proximity of extraordinarily contrasting but seemingly peacefully co-existing people, objects, and layers of both past and present struck me most particularly. There were many different kinds of co-housing communities, ranging from people choosing to live on the banks of the Spree, informally in tents, to high end globally-marketed, river-view luxury apartments, to the self organized, sustainability-focused Spreefeld Cooperative in the middle of these extremes. There were some fragments of the wall and the late 19th Century industrial past poetically evoked by the ruins of three grand old buildings that had endured both world wars and produced things with distinct textures and temperature, like ice, wood, and soap. And then finally, there were the more recent traces of the informally built but internationally famous bars and clubs which were a manifestation and celebration of the unique condition and promise of this city in the early 90s:Kater Holzig, Kiki Blofeld and across the river, Bar 25.  People talked about them. Quite a lot! And so my sense was that in the end with all of Berlin’s complex and layered mythology, history and modernity, it was these quite contemporary ghosts that seem to haunt this particular spot at this moment. 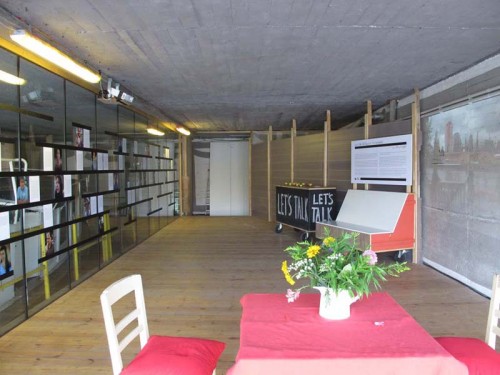 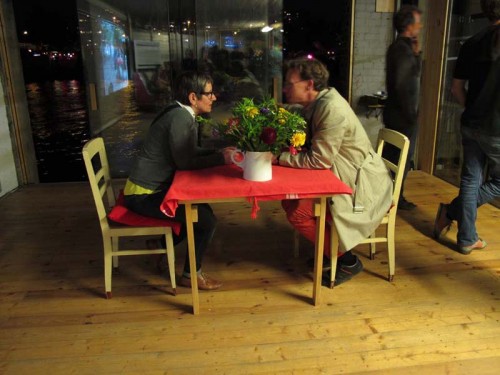 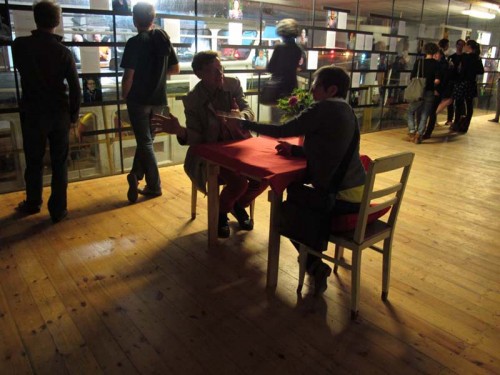 In late September, when I exhibited the project, at an evening event and then for a further four or five days while it was open to the public, the conversation at that red kitchen table continued, surrounded by the film, photographs and their narratives, which existed as by-products or documentation of my process.

Finally, I’d like to reflect in the space of this Open Engagement blogging project, upon my own project and process in Berlin and how it enabled me to understand close up, but with the advantage of distance, something about a fault line running through my own, and many other socially engaged, participatory art practices in Johannesburg, my home city in South Africa, (which is still, one of the most unequal societies in the world). A fault line beyond the extraordinary tension (always) between artistic and social narratives, or beyond the issue of inequality and power relations, and that sometimes-messy bunch of questions about who participates, in what ways, under which circumstances, and at whose expense.

In the South African context, with its deep history and legacy of racial and social injustice and inequality, public engagements are often funded upon the condition that they are in the very first place, ameliorative. That they ‘help’! Public and private sources of arts funding are often predicated upon fantasies of reparation, and funds are granted on conditions such as “skills transfer, education, and sustainability”. Artists are placed, and place themselves under pressure to ‘help’.

In Berlin, it was such a great relief somehow to be working amongst people who mostly lived in a country with a strong social contract between citizens and the state. People did not need my ‘help’, and it was an extraordinary coincidence that while I was thinking about this, with lightness and relief, my counterpart in Johannesburg, artist Anthony Schrag, (from Edinburgh ) with his insightful outsider eyes, picked up on exactly this issue in my home context during his residency in Johannesburg, and provocatively walked through the inner city with a huge sign saying “Art cannot help you,” engaging in conversation about this as he passed people by. Our projects and our different (opposite?) responses to our contexts, became interesting counterpoints – poetically highlighting the bogey of unequal social positions that can dog socially engaged artistic processes in the South African context. 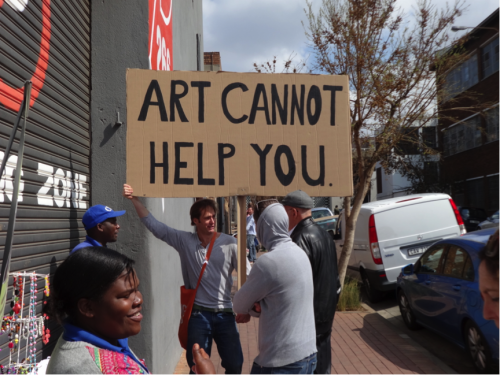 If you are interested in finding out more about Shrag’s project, and the Nine Urban Biotopes the project as a whole, the 9UB e-Publication has just been RELEASED

About the contributor: Terry Kurgan is an artist, writer and curator based in Johannesburg. Her artistic interest is in photography, and in the complex and paradoxical nature of all photographic transactions. She explores this through a diverse body of artwork that foregrounds notions of intimacy, pushing at the boundaries between the private and the public in the South African public domain. Her projects have been sited in spaces as varied as a maternity hospital, a public library, an inner city park and a prison. She’s been awarded many prizes, and has exhibited and published broadly in South Africa and internationally. Her book Hotel Yeoville was published by Fourthwall Books, Johannesburg in 2013, and recent exhibitions include: Public Intimacy: Art And Other: Ordinary Acts In South Africa, San Francisco Museum of Modern Art (SFMOMA) with Yerba Buena Center for the Arts (YBCA), 2014; Sharp, Sharp Johannesburg, La Gaite Lyrique, Paris (2013) and Public Art/Private Lives, Gallery AOP, Johannesburg (2013).

She is currently Artist in Residence at WiSER, Wits University, Johannesburg––where she is producing an artist’s book comprising a series of linked, narrative non-fiction essays that develop in relation to the evocative power of photographs as objects.