THE BATTLE OF OAK STREET: #J28 and the fight for Oakland (a re-enactment) 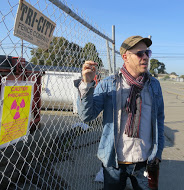 On Jan. 28, 2012, over 2000 Occupy Oakland activists and allies participated in “Move-in Day”, a march to occupy one of Oakland’s unused buildings. Riot police responded with violent force, resulting in multiple injuries and arrests. Outside the Oakland Museum, protestors using homemade shields faced down riot cops in what would become known as the “Battle of Oak Street”. This presentation will explore plans for a re-enactment of the showdown and discuss the aesthetic and political limitations of such works of performance.